October 5, 2022
You’ve Got What You Need Right Now
Sharon Jaynes

Now if we are children, then we are heirs—heirs of God and co-heirs with Christ, if indeed we share in his sufferings in order that we may also share in his glory (Romans 8:17 NIV).

When my husband, Steve, was in high school, he worked various jobs and was notoriously frugal. His twin brother, Dan, and their best friend, Mike, were not quite as thrifty. Dan and Mike had odd jobs from time to time—flipping hamburgers at the Wild Pig being the most infamous. But their funds disappeared as quickly as they got them. Steve, on the other hand, was a saver. And they knew it.

Steve had a little brown wallet with a horse head on the front and a zipper on the top. It was his “saving wallet”, and he kept it safely tucked away in his sock drawer. Occasionally, Steve, Dan, and Mike would get together to plan an adventure, such as a weekend trip to the beach or the mountains, or just a wild night out on the town playing Putt-Putt. Dan and Mike would often say, “Let’s just pool all our money together in one big fund. Steve, go get your horse head. We’ll put all our money on the table and combine it. We won’t worry about whose is whose. “

They knew Mr. Thrifty would have about thirty dollars to match each of their one-dollar contributions. It was a great deal for them. Not so much for Steve.

When we come to Christ, it is as though Jesus says, “Just put what you have in with what I have. Let’s make one big pot. What’s mine is yours.”

The Bible says that you are a co-heir with Christ (Rom. 8:17). That means that you get what Jesus gets. You didn’t earn this inheritance. God is not giving it to you because you were particularly good. He has lavished you with blessings because it pleases him to do so (Eph. 1:7).

The Holy Spirit abides in all believers. You’ve already been given everything you need to live victoriously in and through all things. And yet we wonder, at least I do, Why don’t I operate in the power that I already have? Why is my love so fickle? My power so pale? Why do I cower rather than making demons flee? Why do I live in the cul-de-sac of Christianity rather than venturing out on the highways and byways of the adventurous faith?

God does not need to be stirred, prodded, or roused as if from a sound sleep. We do. We need to wake up, take hold, and live in the power that is already ours.

John wrote: “How great is the love the Father has lavished on us, that we should be called children of God!” (1 John 3:1). To lavish is to give freely, profusely, extravagantly, and abundantly. He doesn’t give us everything we want when we want it. No father wants spoiled children. Rather He gives us everything we need to produce well-behaved children who bear His name well.

One translation of 2 Peter 1:3 says that God has “granted to us everything pertaining to life and godliness . . .” (NASB). The word granted paints the picture of transferring something from one person to another. And isn’t that exactly what God did for you?

He transferred these precious promises from His heart right into your account—not because you deserved them or earned them, but because of His magnificent grace. And notice the verb tense of the word granted. It is past tense. It has already been done. This is not something that you will receive in the future, but you have access to it right here, right now.

More from the Girlfriends 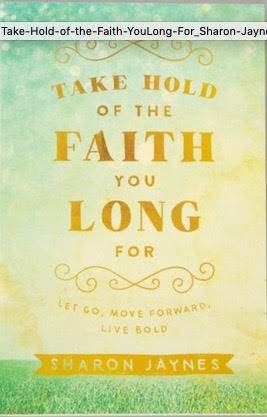 Today’s devotion was taken from Sharon’s book, Take Hold of the Faith you Long For: Let Go, Move Forward, Live Bold. A mediocre, mundane faith is not what you were made for! In Take Hold of the Faith You Long For, you’ll learn the most common reasons we get stuck in our Christian faith, living less than what we had hoped. You’ll also learn how to break free of all that holds you back, move forward with all that God promises, and live the adventurous faith of bold believing.

Did someone forward this devotional to you? Click here  to receive Girlfriends in God weekday devotions delivered directly to your inbox!

This content first appeared on Crosswalk.com and is used here with permission. To view the original visit: https://www.crosswalk.com/devotionals/girlfriends/girlfriends-in-god-october-5-2022.html