“Now when He got into a boat, His disciples followed Him. And suddenly a great tempest arose on the sea, so that the boat was covered with the waves. But He was asleep” (Matthew 8:23–24).

The film The Perfect Storm tells the story of an actual storm off the coast of Massachusetts in 1991, which was the strongest storm in recorded history. This so-called perfect storm was the result of three storms that combined into one, creating an almost apocalyptic situation in the Atlantic Ocean. Two existing storms were hit by a hurricane, ironically dubbed Hurricane Grace. The combination of these three weather elements produced a monstrous, two-thousand-mile-wide hurricane that produced one-hundred-foot waves.

In Matthew 8 we find a story of Jesus’ disciples facing what could be described as a Hurricane Grace of their own. We are told that “when [Jesus] got into a boat, His disciples followed Him. And suddenly a great tempest arose on the sea, so that the boat was covered with the waves. But He was asleep” (verses 23–24).

Notice that verse 23 says, “His disciples followed Him.” And where did that lead? Right into a storm. This storm came because the disciples obeyed the Lord, not because they disobeyed Him. Sometimes when troubles come, we say that it’s a result of disobedience. But the fact may be that the storm is actually a result of obedience.

God can use the storms in our lives to accomplish His purposes. As the saying goes, the same hammer that shatters glass also forges steel. Sometimes it seems as though it would be better if we never went through a storm. We think life always should be easy. But there are things we learn in storms. There are things we learn in hardships and crises that we don’t learn anywhere else. 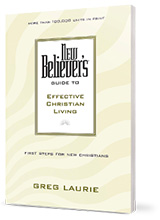 This content first appeared on Crosswalk.com and is used here with permission. To view the original visit: https://www.crosswalk.com/devotionals/harvestdaily/greg-laurie-devotion-august-8-2022.html